One of the ways I enjoy engaging community is through informal education, such as volunteering in public educational outreach. This includes sharing observational aspects of astronomy through telescope viewing and planetarium presentations. For example, during the 2017 total solar eclipse visible from my residence in Nashville, I organized a public viewing using my telescope and a solar filter in a neighborhood park.

Another special event to me was working with my colleagues in the Department of Physics at the University of Alaska Anchorage to make a large public viewing event of the Venus transit of the Sun in 2012 (cover photo).

Instruction of math and science at the introductory level, or at the level that is oft-stated as the “general public”, is delightful to me because of how it introduces differing sets of normative knowledges and practices used by statisticians and sciences respectively. Rather than teach these disciplines and their methods as producing truths or universals, I aim to frame them as constructed to produce particular understandings. This is because I value multiple forms of knowledge-generation between and among the arts, sciences, social sciences, and humanities, which are fraught with pushes to privilege and fund some kinds of inquiries and not others. Therefore, a minor theme in my instruction of major disciplinary content and practices regards tracing the assumptions and practices of differing disciplinary methods, and what is missed when only some forms of inquiry are considered “valid” or comprehensible.

As much as possible, I also indoctrinate practices that align with several philosophies, including that (1) students’ initial ideas about phenomenon and enable reflection on respective changes should be welcomed, (2) classmates can be considered thought-provoking resources rather than competitors, and (3) knowledge is a social-material construction influenced by and influencing place. 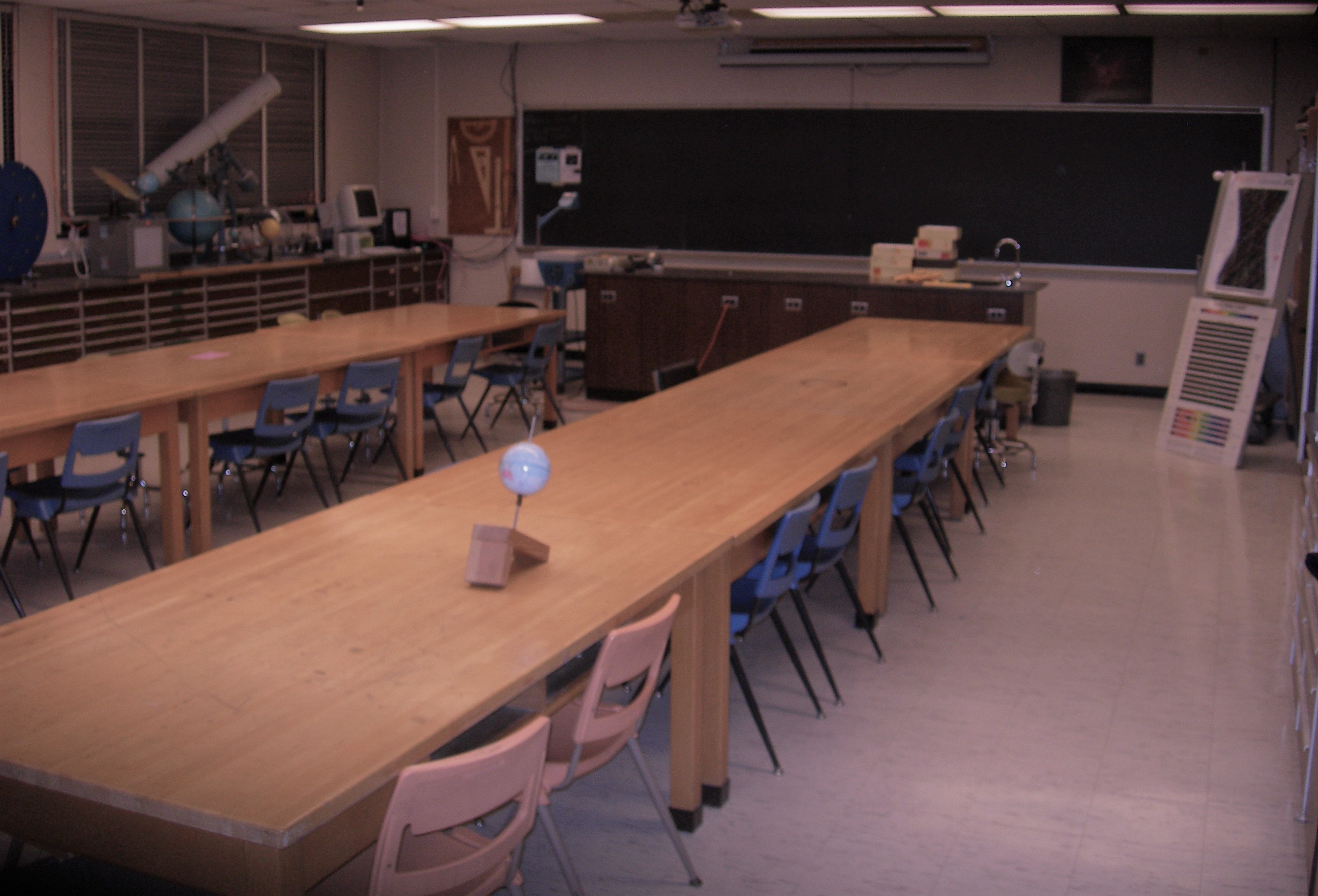 My first seven years of undergraduate teaching experiences were dedicated toward astronomy laboratory instruction. The learn-by-doing approach foregrounded in labs, combined with my growing expertise in learning theories, has since enabled me to creatively craft science lecture courses to have the look and feel of a workshop, as opposed to a one-way transmission of knowledge. This is important to me because of my research-based philosophy that learning is a sociocultural, embodied phenomenon. That is, learning does not happen only in the mind: the place in which learning occurs, the people with whom it occurs, and the materials with which one interacts all have implications for how one receives, processes, and remembers new ideas. Consequently, a cornerstone of my science instruction is formative assessment – creating means by which to learn about students’ initial and developing ideas – through multiple modes of inquiry. During each class period, I use writing and drawing prompts and think-pair-shares. As much as possible, I make use of kinesthetic activities. By enabling myself opportunities to listen to and see students’ ideas, I became aware of concepts that need further addressing. Thus, formative assessment treats students’ initial and developing ideas as assets, rather than right and wrong. This is an important shift required to establishing a safe, collaborative classroom community. 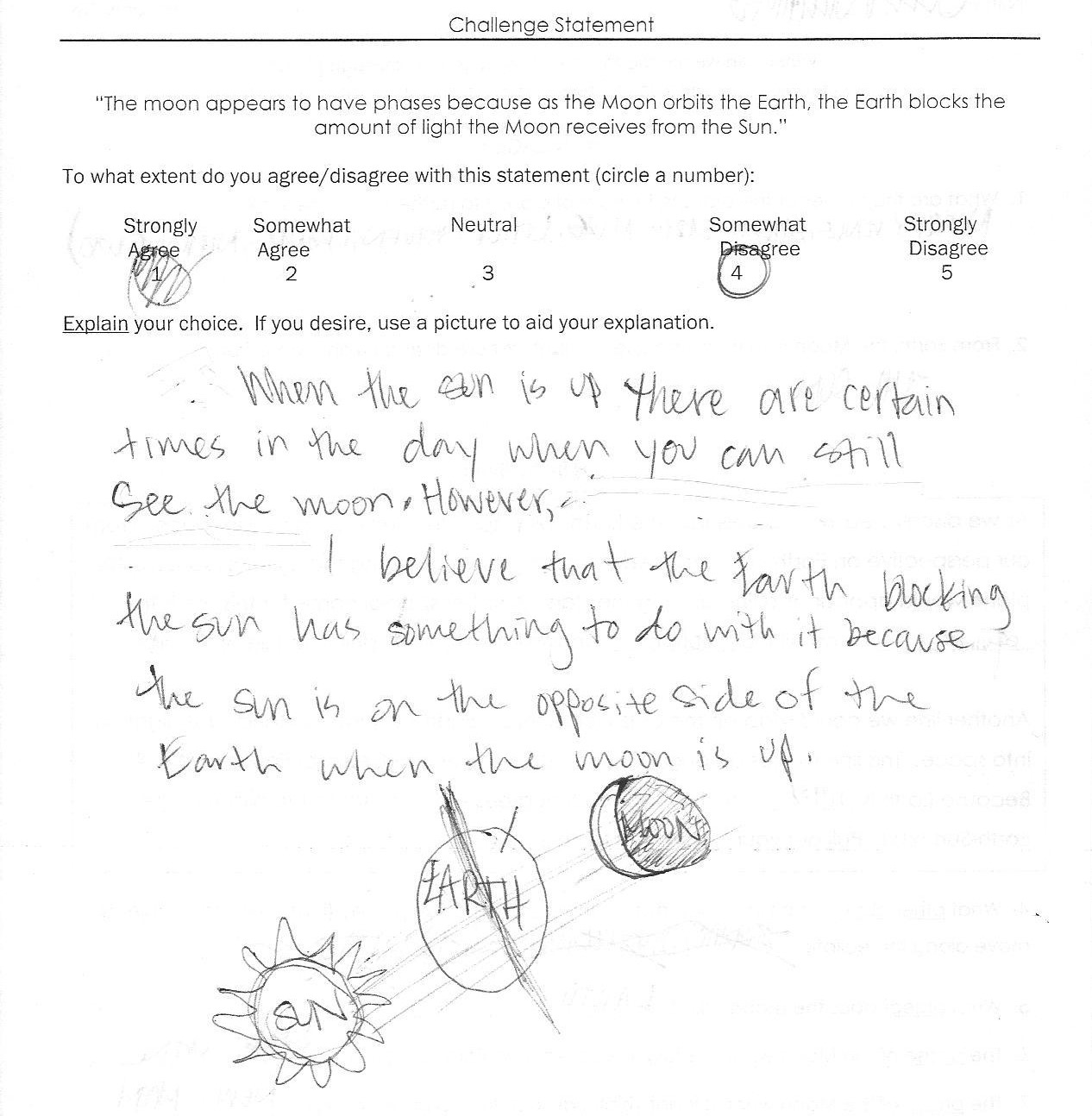 Establishing a safe, collaborative classroom community is my goal from the first week of instruction. If students do not feel their ideas are valued by me or their peers, they will be less likely to voice them. Consequently, I often assign students to sit in groups of two to three persons so that they have someone to talk to about conceptually-rich questions before being held accountable for their ideas among the entire class. When going over answers to formative assessment questions, I either call on a randomized group, or solicit volunteers from three groups to share their group’s response. I always ask about students’ ideas in terms of their group’s ideas, “What did your group say about #5?” so as not to place the burden of being right or wrong on any one individual. A second way I seek to establish classroom community early on during instruction is by establishing a classroom community contract in which students reflect on a good learning experience, outlining what the teacher was doing, and what the students were doing. By sharing these ideas aloud, the class – myself included – becomes aware of what they can do to support one another’s learning.

Beyond making contracts and mixing students’ groupings through assignment, this semester I am attempting a new feat in the goal of developing a safe, collaborative classroom community: I am spending one-quarter of the course on socioscientific controversial issues related to astronomy in which students deliberate on a range perspectives and contemplate their own positioning therein. Example issues include whether astronomers should build telescopes on indigenous landscapes, whether a global satellite network should be advanced despite its disruption of astronomers’ ground-based view of the universe, and what can be done about the lack of diversity in STEM. To better enable these deliberations, I have arranged for our class to meet in a learning space with round tables, one day a week. I am advancing this sociocultural element of science instruction, typically left out of introductory astronomy, as I believe it will enable our classroom community a better sensing of our place in the Universe, and our coincident responsibility to one another in making the world. 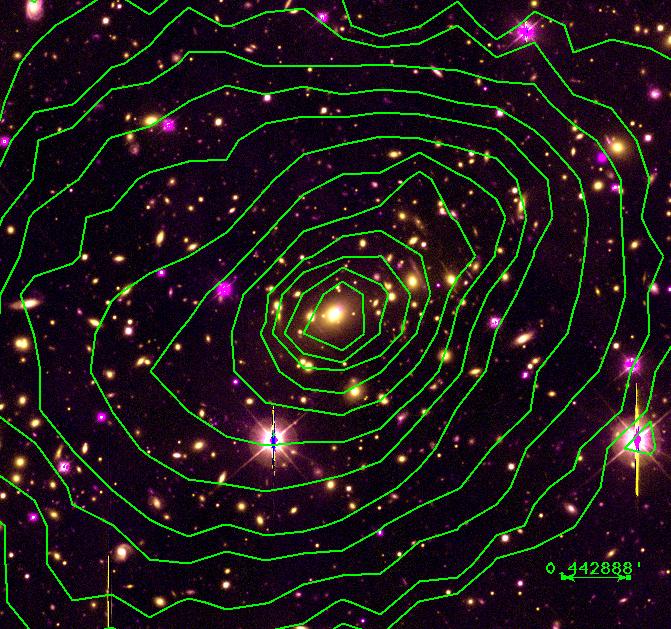 Storylining the courses I teach is incredibly important to me, because as Maria Popova theorizes, it is stories that change the world. Rather than teaching astronomy as disjointed topics, I think that by designing a sequence of topics that build on one another, students can more easily see connections between topics. This semester, while I am teaching Stars and Galaxies by the books, my storyline regards our place in the Universe, and how we came to know this place. I started the course by familiarizing students with the language by which astronomers have mapped the heavens: e.g., using magnitudes (brightnesses) of celestial objects and a spherical coordinate system of which we can only see half at any one time. Thereafter, we are embarking on puzzling phenomenon astronomers observed over the past 100 years, and what new awareness of star and galaxy formation these observations enabled human kind – ultimately, how we came to know that we are made of stardust. At the same time that we explore these findings observation-based findings, we will explore modern-day impediments to observation: with the Penn State Sustainability Institute and the State College Bureau, I have organized a project in which students will collect and analyze data related to light pollution around our city, with the goal of reducing wasted energy that also negatively impacts animal dynamics and views of the night sky. Thus, I have creatively crafted a storyline that weaves together growing awareness of how we came to know our place in the Universe, with how we can actively contribute to sustaining this growing awareness – a feature of sustainability education. You can see some of my students’ contributions to the State College Borough’s request for a light pollution analysis at the Penn State Spring 2020 Sustainability Institute Expo website. 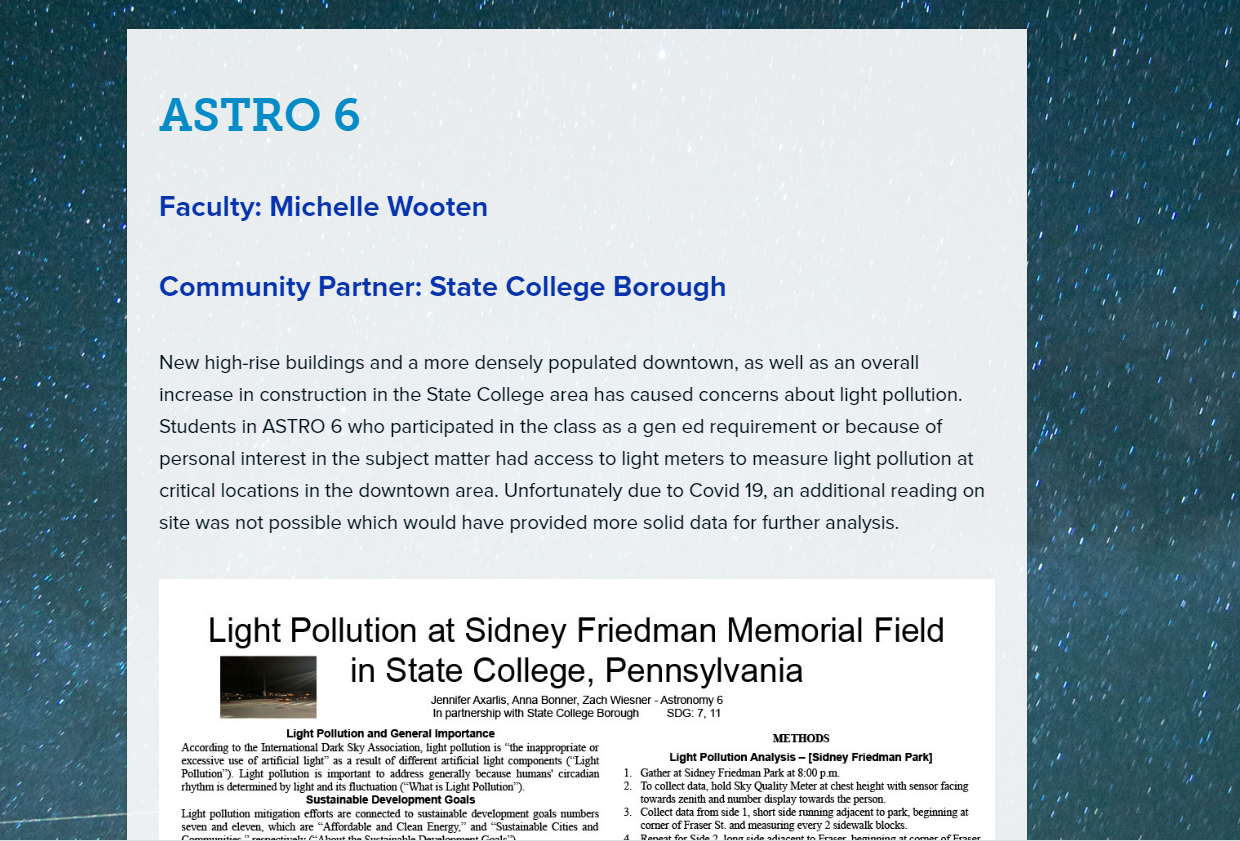